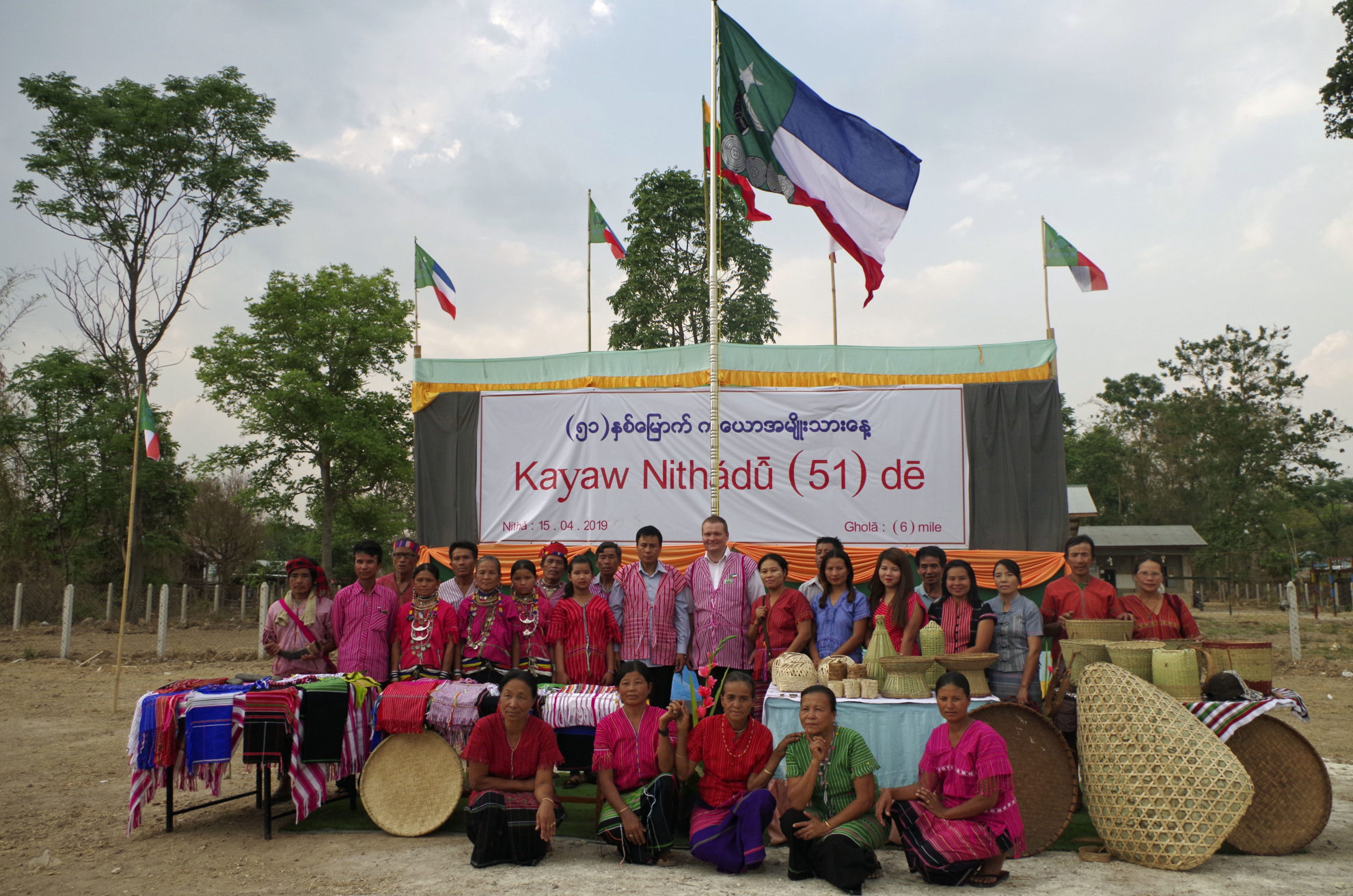 Museums and indigenous societies: New forms of sharing and cooperation

Part 2: In the Karenni region of Myanmar

As I had already undertaken short private research visits to the Karenni region in August 2016 and in January and February 2018, I was aware of the activities, the impressive commitment and ambitions of the indigenous cultural committees, but also of the desolate state of the government run provincial museum in Loikaw, which presents a gallery of “indigenous costumes” in accordance with the state doctrine of the 135 “National Races” with puppets that are as naturalistic as possible and some very questionable texts. An offer for cooperation from my side to the management of the provincial museum, hoping to modernize texts and presentation together, was met with little interest. The attempts of the indigenous cultural committees on site to influence the inadequacy of the presentation of their culture had likewise not been successful.

The starting point for the LindenLAB was the Linden-Museum’s collection from the region, which mainly consists of objects from the Kayan and to a lesser extent the Kayaw, acquired by a German diplomat in the 1960s. The Kayan are the larger of the two groups, with about 350,000 members and four sub-groups (Kayan Lahta (formerly known as Zayein), Kayan Kakhaung (also known by the exonym Padaung), Kayan Kangan (Yinbaw) and Kayan Kadaw (Gekho). Since 2007, they have held a National Convention every three years with the participation of representatives of all villages and all religious and political groups. There, a cultural committee of 21 people is elected. Special care is taken to ensure that all political, ethnic and religious Kayan groups are represented on the committee, as the committee often acts as a mediator in case of conflict. The majority of the Kayan are Catholics, but there are also large Baptist and Buddhist minorities as well as a small but influential community that maintains the old, animist faith. Their settlement area mainly covers Southern Shan State and Kayah State, with some villages also in Kayin State and Naypyitaw Union territory. The central office of the Cultural Committee is located in Pekon, Shan State, local offices are also located in Loikaw and Demoso, Kayah State.

With almost 50,000 members, the Kayaw are the smaller of the two groups and their traditional settlement areas lie further south in Kayah State and Kayin State. More than 90% of the Kayaw are Catholics and church networks and spaces play an important role in the organization of cultural activities. The Kayaw cultural committee has been active since the 1960s and consists of volunteers; anyone who wants to can participate. A small minority of the Kayaw are Baptists and are now well involved in these activities through ecumenical cooperation. They also maintain intensive contacts with Baptist Kayin who live further south and participate in some of their cultural programmes.

The time frame for the research and networking trip planned as part of the LindenLAB was March/April 2019, as during these months Myanmar has its long school holidays and numerous public holidays, so that the activities of the indigenous cultural committees are also concentrated on this period: Summer camps for young people, youth meetings, teacher trainings and the Kayan and Kayaw National Days on April 10th and 15th, which are also organized by the cultural committees. At many of these events, traveling exhibitions curated by the committees are shown about the traditional material culture of the respective indigenous group and, in connection with fundraising activities, plans for their own cultural centers with permanent exhibition spaces are also presented. First, as a participating observer, I would thus have ample opportunity to better understand the activities, practices, concerns and needs of the cultural committees. On the other hand, I hoped for many opportunities to discuss with them what they would like to see in a partnership with the Linden-Museum and what forms of cooperation might be useful.

During my last visit in 2018, I had already been in discussion with the Kayaw cultural committee about a possible joint event to promote the cultivation and transmission of traditional cultural techniques. The original idea was to organize and film a competition during the Kayaw National Day, to award prizes for the best results and to show them in a traveling exhibition in Myanmar and Germany. During preliminary talks, however, it was decided to focus on teaching Kayaw youth who often had little contact with these techniques, especially if they grew up in the cities. Before the Kayaw National Day, which takes place every year on April 15th, a three-day Kayaw youth meeting with about 450 young people from all over the region was planned for April 12th to 14th. It was decided to invite experts from the sometimes very remote villages who would pass on their knowledge to the young people during the meeting. This process was to be documented with photos and film recordings. The results of their demonstrations were then to be presented in anexhibition on Kayaw National Day and the best were to be awarded prizes. In addition, the experts were offered that we would purchase the objects for the cultural committee to use in their future exhibitions. Travel costs for the experts, purchases and prize money would be financed by LindenLAB’s project funds, and the local people of the hosting Kayaw village (this year 6-Mile Village) would provide accommodation and food for the experts.

The Kayan cultural committee was approached to see if they were interested in something similar. They decided, however, that the organization of Kayan National Day on April 10th and the other events already planned was so much work for them that they would prefer to record video documentations of the intangible cultural heritage of Kayan afterwards and use them for future events and exhibitions. The advisory and financial support for these projects through the Linden-Museum was arranged.

At the Kayan Lahta Festival and the two national holidays, there were exhibition rooms constructed from tarpaulins, in which exhibitions curated by the committees were shown.

Conversations with the committees revealed that there is a great interest in exchange and further training in museum work, especially in the fields of exhibition design, proper storage and conservation of objects not on display, and cultural education, both for the design of current travelling exhibitions and with regard to the planning of future cultural centres with their permanent exhibition rooms. Together we decided that a four-member delegation with two members of each committee would visit us in Stuttgart to curate an exhibition, accompanied by our specialists, using existing collections of the Linden-Museum and new objects created as a part of the projects implemented within the Lab. On the one hand, they would decide completely for themselves how Kayaw and Kayan culture should be presented, and on the other hand we would offer workshops on various working techniques and try them out together in the exhibition. Both committees decided independently and without any influence from my side who would be part of the delegation and which newly made objects they would bring.

This stay, which took place in November 2019, will be the subject of another blog post.